Opening Up About My Pre-Natal Depression

From the moment we found out we were pregnant the negative thoughts began to roll in like a swelling ocean tide. Don’t get me wrong, I was over the moon and incredibly grateful that we were blessed with another pregnancy. However, the thought of having 5 children overwhelmed me… and, honestly, it still does! In my mind, I was barely coping with managing the 4 beautiful children that I already had. How on earth was I going to manage 5? 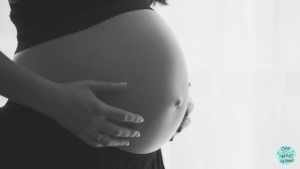 It began with subtle changes in my mood and emotions. I wasn’t able to sleep at night and then spent most of my early mornings snoozing on the couch while my girls played all around me. I struggled to concentrate, was constantly irritable, cried almost daily, and even stopped venturing out of the house as much as I used to. Naturally, I thought this was due to being pregnant. All those raging hormones. Nothing more to worry about, right?

It seemed as if I fell into a daily routine of just going through the motions in order to get the bare minimum done. And what made this slowly deepening depression all the more painful was the fact that it was a particularly difficult pregnancy – much more so than with the others. If someone stopped me and asked how I was doing, I would plaster on the biggest smile I could muster and simply say “I’m DONE” with a nervous giggle, and laugh about the joys of being pregnant. All while actually being terribly miserable.

My kids and husband annoyed me (it still hurts knowing that I felt this way towards them), and in all honesty, I just wanted to be left alone while I was trying to come to terms with unsettling feelings of guilt towards my unborn son.

Pregnancy is supposed to be the most joyous time. I should be taking countless photo’s, documenting every milestone reached. Why wasn’t I drowned in serotonin?

My poor husband taking it all in his stride, being ever so patient and kind turned to me one day and suggested I see someone. SEE SOMEONE? Me? I don’t need to see someone, I just needed to suck it up for a few more months. Well, that was my attitude. Not that it did me any good. I struggled through this dark period alone. Pre-natal depression dug its claws into me and held firm…

This post isn’t meant to offer advice or words of wisdom, it’s merely me openly owning the fact that I battled with depression during my pregnancy and if you find yourself in a similar position. Ask for help, I wish I had.

P.S. The moment my little man arrived, it was love at first sight. I could not imagine my life without him.

We use cookies to ensure that we give you the best experience on our website. If you continue to use this site we will assume that you are happy with it.Ok