Breastfeeding…Yes, you heard right… Breastfeeding! And no, I don’t have boobs full of milk! I am wanting to express (pardon the pun!) how I felt as a dad within a breastfeeding household.

Let me take you right to the start…

Before we had children, I can honestly say, I didn’t know or mind how my offspring were going to be fed. Breastfeeding didn’t even register on my radar. All I knew was bottle feeding and that was cool with me – that’s until Stacey fell pregnant with Eleni.

Breastfeeding was the only option for Stacey, and I mean literally the only one. I was always saying to her that I could get some spare milk in the cupboard just in case she struggled or couldn’t, because I knew that that does happen to mums. The answer was always ‘no’. I did at times find that hard, because I didn’t want my little baby to not have anything in reserve just in case. Don’t get me wrong, I always had faith in Stacey and trusted her judgment, but I just wanted a backup plan. I think everyone in our parenting group thought we were bonkers not to have one!

Along came the birth, and we fully became that breastfeeding household. It wasn’t plain sailing though! Eleni’s suction was as powerful as a water pump, and the first few weeks were really difficult. Stacey’s nipples literally had to re-grow (they were that sore). There were definitely some difficult nights, and Stacey really struggled. It was made even worse by the fact that she couldn’t express much either, but her determination to give our daughter the best paid off and after 3 weeks it eventually got easier.

My admiration for Stacey was through the roof, but I also had this feeling of uselessness running through me. I wanted to feed my daughter and wanted to be the one to watch her feed to sleep. I was bonding in every way possible but felt quite excluded from the feeding, and let’s face it, newborns feed constantly! Whenever she woke up I wanted to be the one to settle her down and give Stacey a rest. but I couldn’t… As minor as that sounds it really did eat away at me. Stacey and I have always been talkers though, and she could see that I was struggling. After a very therapeutic conversation, we decided that after every feed Stacey would hand her over so I could wind her – that way we would both be involved in the process. Peace was once again restored :)

Then our little Noah came along at the beginning of this year… and this time round Stacey was able to express so I could feed him. I was able to say ‘let me do the night shift’, or ‘go for a nap’. Having said that, Stacey forgot to wake up to express in the night and woke up the next morning with boobs ready to explode :) !! 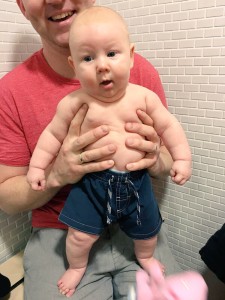 For me as, a dad, being able to feed Noah was amazing. I was finally able to give him the sustenance he needed – there really is nothing more satisfying than seeing your children eating and enjoying it!

I have to give credit to Stacey, her persistence and determination through the dark and painful nights (with both children) right at the start, her breastfeeding journey has really paid off. Her ‘Gold Top’ works a treat though, and our little chunky boy is proof that it’s working wonders!

I just LOVED this post, I found it so honest and endearing! Thank you to Mat Kelly for giving us the inside view of a dad’s experience with regards to Breastfeeding!